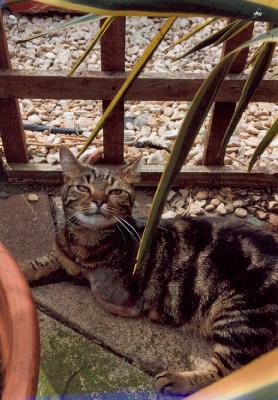 Max is our little miracle cat for this summer. He came home on a Friday morning in June after being out overnight and to his owners’ horror he was missing a front leg. He was rushed straight to the surgery and immediately admitted for stabilisation and treatment.

Amazingly Max wasn’t actually bleeding from the wound so we were able to put him on shock rate intravenous fluids, start him on strong intravenous antibiotics and pain relief. After a couple of hours of monitoring, he was stable enough for us to anaesthetise him and determine the extent of his injuries.

His left fore leg had been severed cleanly off but the remaining wound was contaminated with grass and mud. He also had another wound in his groin but this turned out to be superficial and only involved the skin. We took some x-rays to check for further internal injuries and to determine the damage to the remaining part of his left fore leg. The bone remaining was cracked so we then carried out surgical debridement (cleaning contaminated tissue from the wound) and we made a cleaner amputation of the remaining bone of the leg. The wound was closed with a surgical drain in place – this was to help any infected fluid that might build up to drain away and not cause a swelling under the closed skin wound.

Max was stable throughout the anaesthetic and recovered well. We continued to monitor him and administer pain relief and antibiotics intravenously. His owners visited that evening and were relieved to find that he seemed to be recovering well.

The following day Max continued to improve although he wouldn’t eat anything that we offered him. His owners visited again and he responded so well to their presence that we decided to discharge him to be cared for at home as a trial. He came back the next day for a check up and was continuing to do well. He was already managing to jump onto a bed, roll about and have his tummy tickled and had worked out how to eat with his buster collar (cone of shame) on.

After that his owners continued to care for him at home; they spent hours with him giving him attention as he had to be kept in a bedroom separately as they have other pets. He has been coming on leaps and bounds since. He has since had his drain and stitches removed and is healing up brilliantly. He is managing on three legs and seems happy and content.

We won’t ever know what happened to cause this terrible injury but our best guess is that he got his leg caught by a train – the wound has such clean skin edges that a trap or animal attack seems much less likely. Max really is a miracle cat – he managed to get home after a debilitating injury and he coped beyond that point so well that his owners tell me he is very keen to go outside again! I think it may be some time before he goes back out though and hopefully he will have learnt to stay away from train lines! 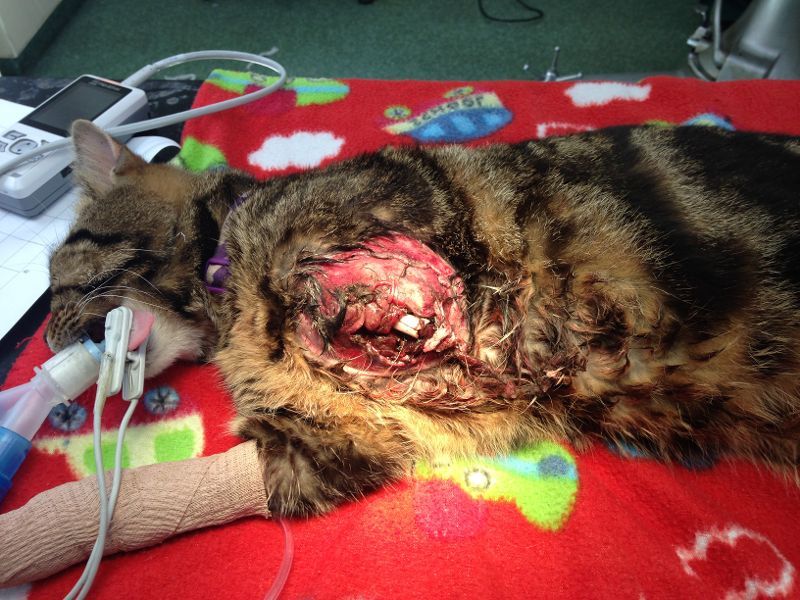